Russia and China are betting that autocracy will beat democracy. That’s according to US President Joe Biden. But apart from generating headlines, his explosive claim seems to have little to do with the reality in either country. 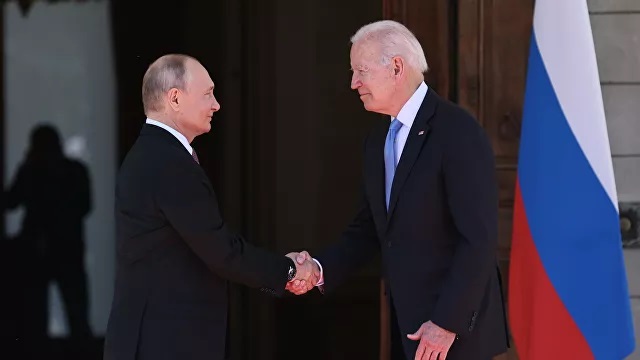 Not only is lumping the two states together a mistake, so too is the act of contrasting the two ideologies. The language of political philosophy is, sadly, unsuited to the task of describing political realities. We bandy about words such as “liberalism,” “socialism,” and “fascism,” as if we know what they mean. In fact, they are horribly loose categories that even the brightest political philosopher struggles to define, and confuse more often than they help.

Biden fits neatly within an American tradition that regards the United States as the natural leader of the “free” world, splitting countries neatly into two – democracies on the one hand, and everybody else on the other.

Regardless of the huge variety of differences between the nations in the “other” category, they tend to be lumped in together under a single heading: autocracy. There is no room for shades of gray. Thus, in the president’s rhetoric, the world consists of two parts: democracies and autocracies.

The primary autocracy, and thus the main threat to the free world, in Biden’s view, is the People’s Republic of China. The secondary autocracy, and thus the next greatest danger, is Russia. In the American president’s eyes, the two states are in essence one and the same. Thus, back in March, he complained that Chinese leader Xi Jinping is “one of the guys, like [Russian president Vladimir] Putin, who thinks that autocracy is the wave of the future – democracy can’t function in an ever [more] complex world.”

On Wednesday this week, Biden was at it again. According to press reports, he told the CNN ‘town hall’ meeting that “China’s Xi Jinping and Russia’s Vladimir Putin are banking on a future not of democracy but autocracy.” The dichotomy couldn’t be clearer.

Unfortunately, clarity is not the same as accuracy, and there are some serious problems in the way that Biden paints the world.

First, China and Russia are very different. China is a one-party state that exerts tight control over society. Russia has a hybrid system that defies simple definition, but that involves very loose state control over society and combines the formalities of multiparty democracy with informal mechanisms of government that, on occasion, defy democratic norms such as the rule of law.

Putting China and Russia together in a single category, and contrasting it with democracy – which itself has so many variations as to be a dubious category of its own – is thoroughly misleading.

Second, Putin himself has never publicly expressed any hostility towards democracy. If you are in doubt, check his public statements over the past 20 years. You won’t find a bad word about democracy. It’s true that, over time, Putin’s initial praise of it has been replaced largely by silence. He has also often criticized the practices of self-defined Western “democracies”. But he has never challenged the idea of self-determination at the ballot box as a principle.

Nor has he ever proposed any alternative. Instead, he has limited himself to statements that the forms democracy takes must fit the circumstances of any given country, which, in Russia’s case, means a strong presidential system. It could be argued that Putin doesn’t understand democracy in the way that Americans do, and that, as such, he’s not a real democrat, but he has never given any indication that he is banking on democracy’s failure.

One can see this in Russian foreign policy. Putin has never shown any preference for non-democratic regimes over democratic ones. Russia has partners that are democratic and partners that are not. It has shown no inclination to bank on one or the other. All it cares is that foreign states are friendly; their political systems are irrelevant.

Quite literally, in its original Greek form, autoskratos means rule by one person. The same applies to the Russian word samoderzhavie. The word autocracy therefore tells us where power should be located – in a single individual – but it tells us nothing about how the autocrat is chosen, how much power he or she should have, or what things he or she should have power over.

Autocracy, in other words, is not the same thing as authoritarianism, let alone totalitarianism. The autocrat is meant to be bound by religion, morality, custom, and, in some later versions, law. At least in theory, if not always in practice, autocracy is a form of limited government.

Since the autocrat can be elected, autocracy and democracy can even go together. There’s also absolutely nothing stopping the autocrat from being a liberal. In fact, in Russian history, some of the most ardent supporters of autocracy have been liberals, on the basis that democracy is likely to be very conservative, given the political tendencies of the masses.

Insofar as modern Russia is an autocracy, that is because it has a highly centralized system of government that gives enormous powers to the president. But this was very much a construction of Russian liberals who wanted to concentrate authority in the hands of president Boris Yeltsin in the 1990s. Modern Russian autocracy, in other words, is a liberal creation.

Of course, none of this means that autocracy can’t be illiberal, undemocratic, corrupt, or incompetent. Often it is. Nevertheless, simplistic phraseology such as ‘democracy versus autocracy’ does a very bad job of explaining the realities of political life. While Biden might think Putin and Xi are ideologically united in a global struggle against democracy, there’s very little evidence behind his thinking.