Sirens blared in Jerusalem after several rockets were fired on the city on Monday. Hamas has claimed responsibility for the attack, launched after it ordered Israeli forces to withdraw from some areas amid escalating tensions. 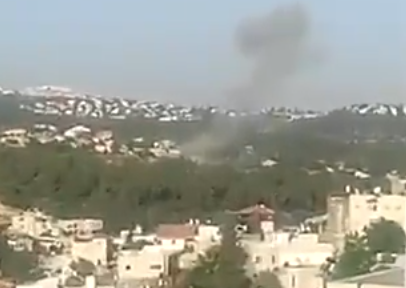 A spokesperson for Hamas’ military branch said it had fired rockets at Jerusalem in response to Israeli crimes and aggression, including against people in the Palestinian neighborhood of Sheikh Jarrah, where families are facing forced evictions, and at Al-Aqsa Mosque.

Following the rocket launches, Israel dispatched troops to the Gaza border and its air force launched strikes on alleged Hamas targets, according to Haaretz. Palestinian media have reported that three children were killed in those strikes.

Footage posted to social media appeared to show rockets being fired towards Jerusalem from Gaza, one of which reportedly landed near the Abu Ghosh area.

Three rockets fired from #Gaza towards #Jerusalem. One landed near Abu Ghosh. pic.twitter.com/WQzwcwB2JN

There have not been any reports of injuries, but one rocket reportedly caused some damage to a house, according to Israeli broadcaster Channel 12. Israel’s military said seven rockets were fired towards Jerusalem, one of which was intercepted, with the rest landing in open areas, the source reported.

The Israeli Defense Forces (IDF) also said in a statement that a “barrage of rockets” was being fired toward southern Israel. It said a civilian vehicle had been struck in the area and one person was injured.

Earlier on Monday, the IDF announced that it was suspending large-scale drills in order to prepare for potential violence as tensions escalated in Jerusalem. In a statement, Chief of Staff Lieutenant-General Aviv Kohavi said troops were being ordered to “focus all efforts on preparations and readiness for escalation scenarios.”

On Monday, Israelis marked Jerusalem Day to honor the establishment of Israeli control over the Old City after the Six-Day War in 1967. However, earlier in the day Israeli police changed the route of the traditional flag-waving ceremony so that Jews were barred from the holy Temple Mount site, an area also sacred for Muslims.

Hundreds of people were also reported to have been injured earlier when Israeli forces fired stun grenades and gas canisters in Al-Aqsa mosque.

Tensions have increased in Jerusalem over the last week amid multiple protests against the eviction of Palestinian families from areas of East Jerusalem claimed by Israel.

Cuba advises tourists to visit Island without dollars in cash

Soviet collapse taught Russians the danger of being a messianic superpower. Biden makes it clear America hasn’t learnt the lesson