Protests have begun in Moscow, hours after cities in the east of Russia saw similar rallies. The crowds, smaller than expected by organizers, are demanding the release of opposition figure Alexey Navalny, jailed since January. 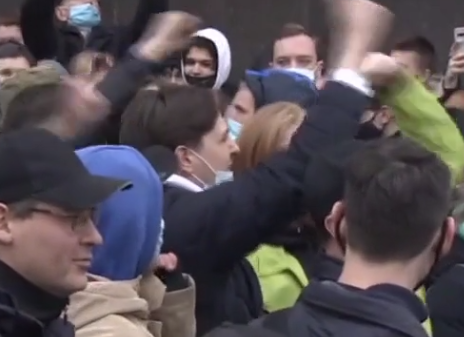 Footage from the center of the Russian capital, where the unauthorized rally was set to be held on Wednesday, showed riot police erecting barricades, while uniformed officers asked crowds – with many protesters shouting anti-Kremlin slogans – to disperse.

Moscow authorities had rejected an application for a protest, and gatherings without permits are currently banned under rules linked to the Covid-19 pandemic.

The Interior Ministry estimated later on Wednesday that around 6,000 people had taken part in the rally in Moscow, which has a population of 12 million. Officials added that close to 4,500 had taken to the streets in St. Petersburg, which is the country’s second-largest city, with nearly five million residents.

Allies of Navalny, who was jailed earlier this year for breaching the terms of a suspended sentence for fraud, had called for a national day of protest to demand he be released from prison. Hundreds of thousands of signatures backing the action had been collected online, but in many cities, only a small fraction of those registered showed up.

In the southern Russian city of Volgograd, for example, the daily newspaper Kommersant reported around 300 protesters in attendance. The ‘Free Navalny’ website had collected over 4,000 signatures from those claiming to be interested in joining from the local area.The anti-corruption campaigner announced he would begin a hunger strike on March 31, and says he has not eaten since then. He is protesting over claims that he had been prevented from seeing his personal doctors for leg and back pain. It is not customary for inmates in Russian prison colonies to choose their physicians, and the country’s human rights ombudsman, Tatyana Moskalkova, told journalists earlier on Wednesday that he had been seen by four separate medics, who are providing him with nutrients through a drip.

Police reportedly made arrests at protests held in cities in Siberia and the Far East earlier the same day. OVD-Info, an opposition-linked NGO that has received Western funding, claimed that as many as 300 people may have been detained, but official estimates are not yet available.

Among those held by security forces are two of Navalny’s most prominent allies still left in Russia, lawyer Lubov Sobol and press-secretary Kira Yarmysh. Both were picked up by officers early on Wednesday, long before the protests were due to be held. Sobol’s own legal representative says that she was pulled over while riding in a taxi. “The reason for the detention is not yet known,” Vladimir Voronin explained to Moscow news agency TASS.Thousands of people took to the streets to protest Navalny’s arrest over two consecutive weekends earlier this year. He was taken into custody after landing in Moscow from Berlin, where he had been transferred for medical treatment following what he and his doctors claimed was poisoning with the nerve agent novichok. The campaigner alleges that the incident was a state-sponsored assassination attempt.

The Kremlin has repeatedly rejected these claims, while the US and other Western nations have unveiled sanctions on those they believe to be responsible, as well as officials involved in alleged “human rights” abuses in the policing of the protests.