China has successfully launched the Shenzhou-12 – its first manned mission in five years – further accelerating its space programme to rival the United States. 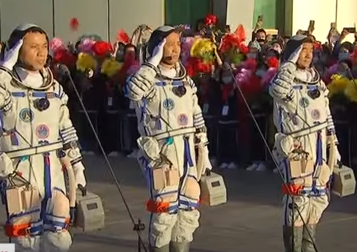 Shenzhou-12, meaning “Divine Vessel”, lifted off at about 01:22 GMT on Thursday from the Jiuquan Satellite Launch Center in northwest China, according to the live video broadcast on state television, CCTV.

The launch was carried with a Long March-2F carrier rocket.

In the CCTV live video, two of the three astronauts made an “OK” hand gesture as Shenzhou crossed the Earth’s atmosphere and following the critical separation of the four boosters.“The flight was perfectly smooth,” Chen Shanguang, deputy director of China’s manned space programme, was quoted by news reports as saying.

“This is the first step. There are many challenges ahead.”

After entering orbit, the spaceship will conduct a fast automated “rendezvous and docking with the in-orbit space station core module Tianhe”, according to CCTV.

The astronauts will be stationed in the core module and remain in orbit for three months.

State-owned Global Times publication quoted Gao Xu, deputy director designer of the Shenzhou-12, as saying that the development of the manned spacecraft followed “the highest standards in the country’s space industry.”

The Shenzhou-12 is made up of three sections – an orbiter module, a return module and a propelling module, and has 14 sub-systems onboard.

In the Global Times interview, Gao referred to the spacecraft as a “vessel of life”, as it will not only ferry the three astronauts to the orbiting Tianhe core module, but is also expected to carry them home to Earth in approximately 90 days.

In an interview with the source, Jonti Horner, a space expert from Australia’s University of Southern Queensland, said that the advances being made by China’s programme is “incredible”.

“I think China has, in the last 12 months, really put itself front and centre in space exploration,” he said, noting how Beijing is successful in its first attempt to send a manned aircraft to space, while noting that the country has also sent its first mission in Mars in recent weeks.

China began construction of the space station this year with the launch of Tianhe – the first and largest of the station’s three modules – in late April.

It is Liu’s second mission to space, his first being the Shenzhou-7 mission in 2008, which featured a landmark spacewalk. It is Tang’s first journey into space.

China’s last crewed flight mission was in 2016 when two men – Chen Dong and Jing Haipeng – were sent via the Shenzhou-11 spacecraft to Tiangong-2, a prototype of the space station where they later stayed for about a month.

Beijing’s aim is for the country to become a major spacefaring power by 2030, turning space into the newest frontier of its rivalry with the United States.

In May, China became the second country to put a rover on Mars, two years after landing the first spacecraft on the far side of the moon.